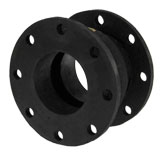 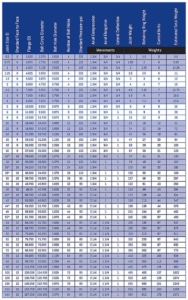 All Super-Flex Expansion Joints have a minimum 3 to 1 safety factor at rated operating temperatures and pressures. To conform to ASTM F1123-87 Standards, which require a minimum 4:1 safety factor, you must reduce the above working pressures by 25%

A major engineering concern in any rigid pipe system involves directional movements caused by thermal expansion. When a piping system is in use the temperature increases the internal and external surfaces of the alloys that make up the piping structure expanding the pipe, and causing the system to deform in a 3-Dimensional field.

Axial Elongation: Axial Elongation is the opposite reaction of the axial compression. Elongation occurs when the two segments of pipe are being pulled apart by thermal expansion in the system. The Polymer based expansion joint is designed to absorb this tensile stress thus protecting the metal components of the system from undue stresses.

Lateral Deformation: Lateral Deformation occurs along the “Y” or “Z” axis and misaligns the faces of the segments of pipe. On an unprotected system this would create sheer stress on the pipe itself decreasing its life span and possibly damaging the machine to which it is attached.

Angular Deformation: Angular Deformation occurs in a combination of the axial and lateral forces in which the piping system is forced in a misalignment not related to an axis. The angular force causes a segment of the pipe to rotate on a pivot point near the connection creating an area of compression along one side of the pipe and an area of extension along the opposite side.

The wide arch of the Superflex style 1000 allows for better flow and less turbulence in the piping system sometimes caused by the arch of an expansion joint. The wide arch also decreases the entrapment of solid materials from depositing within the arch by allowing the flow to continually flush the arch. Some Slurry mixtures require a filled arch design to eliminate deposits of solid material in the arch. The Superflex features standard arch open movements in a filled configuration.

The Superflex Style 1000 is the most popular expansion joint offered by UIP International, Inc. The Superflex can be constructed in a multitude of configurations to meet virtually any need. The hand-wrapped construction of the Style 1000 allows the joint to configure several ways: